In this article, You will learn about Kubernetes Pods, Use Cases, Lifecycle, and a simple example of using a Pod

What is a Pod

A pod usually contains one or more containers that share network and storage resources as well as a specification on how to run the containers. A pod can be made up of single or multi-containers. In either case, the contents of the pod are always co-scheduled and co-located. E.g Let's say you have a multi-container pod i.e Two containers in your pod - One for the actual application and the other one for logging. If the container for application needs to access the logging container - It can just call the logging container directly because it is local to it. Locating your containers in a pod eliminates extra communication setup because they are co-located, so everything is local and they share all the resources.

A Kubernetes Pod usually goes through several phases or Lifecycle as you may call it. The state of the Pod determines where the pod will be in its lifecycle as this is always changing. A pod can be in several phases

NB: Sometimes you can see the status of a Pod as Terminating, this happens when the Pod is being deleted which usually has a term to terminate gracefully. The default is 30s. However, the Terminating state is not part of a Pod Lifecycle.

In this section, You will understand the basic structure of a Pod Template. The template is usually written in YAML.

Let's go over a simple pod manifest, then we’ll look at how to work with it.

The apiVersion, kind, metadata, and spec are required fields that are also applicable to other Kubernetes objects. It is also important to mention that the spec part of the template varies across objects.

Create a file first-pod.yaml and add this

This is an example of a Pod. The name of the pod is my-first-pod and the pod contains a single container i.e nginx. You can also see that the container under the spec section is an array. This means you can have more than one container.

Now deploy the pod to your local cluster. To do that run this command

The kubectl is the command-line interface(CLI) that allows your run commands against the Kubernetes cluster. The command above should create the pod in the default namespace on the cluster

Then run the command below to list the available pods

multi-container pods are very useful for deploying more than a single pod. These pods are usually co-located, co-managed, and share volume together.

To apply the YAML definition, run the command below

This will apply the definition to the current default namespace. The second container terminates immediately after writing to the specified path. To view the status of both containers you can run 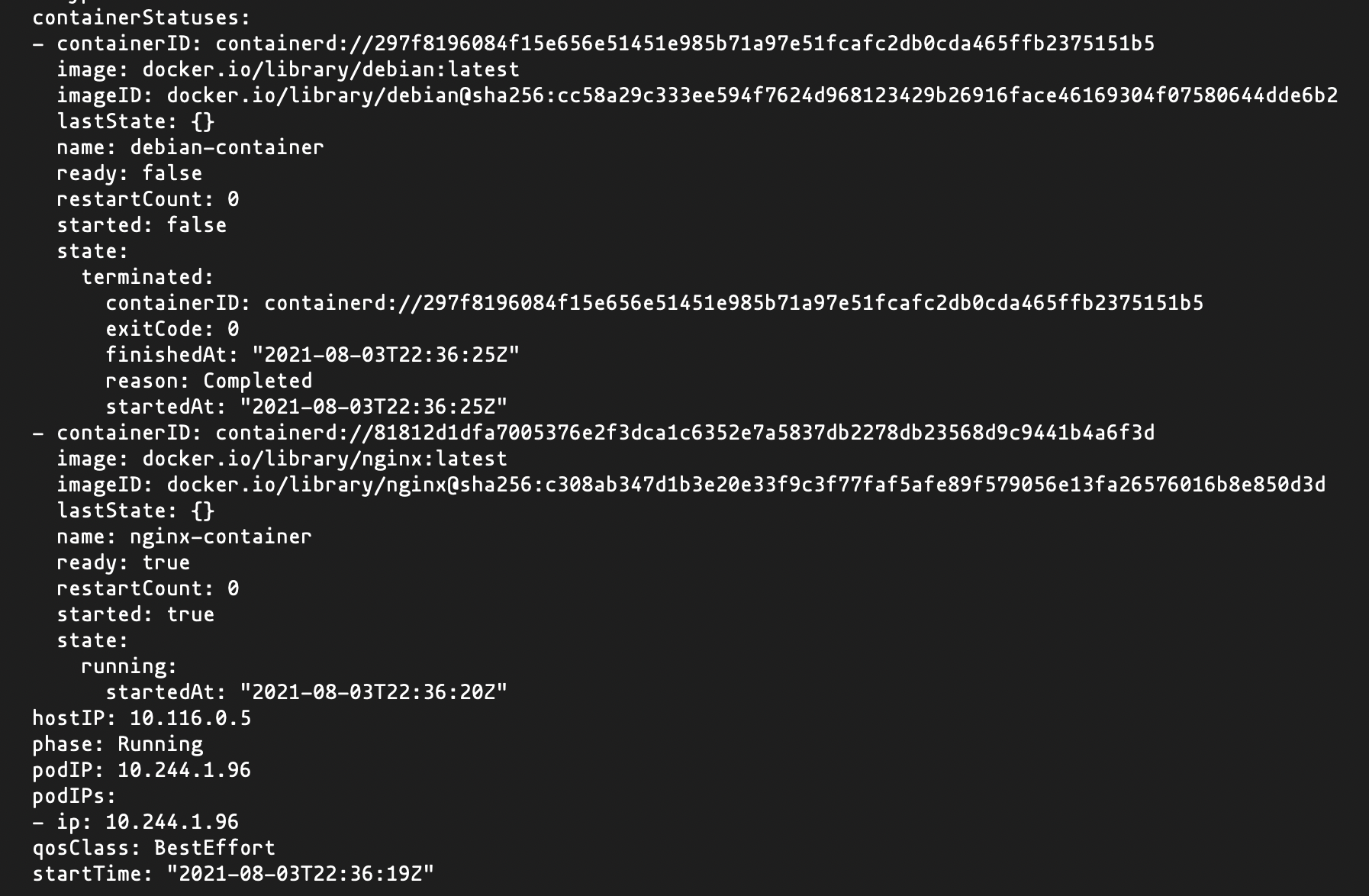 From the output above, you can see the debian-container was terminated while the nginx-container is still running, which is expected.

The command above will login into the container in interactive mode. Because it's a multi-container pod the -c flag is used to specify the name of the container. The /bin/bash is for specifying the shell to use.

Once you have access to the container - You can run

While you might not necessarily use a pod alone to deploy your next application, Understanding how they work is very important. They are the building block of most deployments. Typically you would use a Kubernetes Deployment to deploy your application. Deployment is another type of Kubernetes object. They are more robust and allow you to define more configurations like how many instances(replicas) of your application you want to be running, rolling updates, and other interesting features

In this article, you have learned what a Kubernetes Pod is, The different types, Lifecycle, States, and how to create a multi-container pod sharing the same volume. You can learn more about Kubernetes Pods here